Excitement grips us to the extent, words can’t describe

We started our journey from Hyderabad on 26/1/2012 to explore the valley of shadow – Sandhan Valley which is located in Nasik region. We were 14 GHAC members from different places of Hyderabad with different mind-sets. We all gathered at Begumpet railway station and took a train to Pune. Srikanth, the jolly guy with an exceptional expertise in trekking and mountaineering and Mel, a steel-hearted trekker, were leading the team. They were even responsible for itinerary. As it was the exploration trek so they collected as much info as they can about the route details. They even got some trek maps, to track the way which enormously helped us in reaching the place without any kind of confusion or distraction.
We booked a mini-bus for 3 days to Samrad village which was at a distance of some 180 Km from Pune. Morning at 9:30 AM we boarded our bus and were all excited, experiencing something novel, perhaps it was titillation, hanging round us all. The weather was warm, the sun, to a certain extent was mercilessly casting its rays all over.
It was a long distance from Pune to Sandhan valley. We even had the mind to visit some other places as well which are nearer to or around Sandhan valley. Initially, Srikanth, Mel and Vinay planned to trek Ratangad fort and go have a look at the Amruteshwar temple from Bhandardara dam. (Ratanwadi village was at a distance of some 8 km from Sandhan valley).

Our Luncheon:
We reached Bhandaradara at 4PM. There we had our tasteless lunch. Yes, the readers have read right. We had an insipid lunch because of non-availability of a good restaurant or a hotel there. After our lunch, we visited a temple from Bhandaradara Dam. The Bhandaradara Dam, built in 1926, is one of the oldest dams in Asia and is much renowned for its Umbrella Falls. We spent a couple of moments there near the dam, captured the beauty of waterfall and took the route to temple enjoying the lake-view, to the fullest.
Amruteshwar temple, sparklingly beautiful, is recorded to be constructed in 11th century AD. This temple is dedicated to Lord Shiva. The temple was distinctly and artfully constructed in Hemadpanti style. The intricate carvings symbolize the hidden script and enough to create a mystifying effect on the visitors.


From the temple, Ratangad was a 3 hour trek that which we missed (There was no time so we decided to cancel it. The fort visit would have taken another two hours and even the fort was at a distance of 4250 ft which would ultimately have left us with no chance of returning). We decided to visit Sandhan Valley. We reached Samrad village by 6:30PM and met Mr. Yeshwant.  There we get our dinner cooked for the night and then asked to show the route to Sandhan valley.

All-way excitement:
We started our trek to see the Kokan Kada view point. Even our bus driver, Mr. Laxman, was also excited, seeing the beauty of Sahyadri from view-point. He was shouting and throwing the rocks from the top of the Kokan Kada. We took few snaps there and then back to Sandhan valley base for night camping.


We pitched our tents in an open place which was surrounded by trees, with a bit of narrow passage, leading to the valley. We set a campfire, sat round it and gave formal & fun intro to one another. Karithik shared interesting and real devil stories, related to her life and Mel took interesting sessions on star- navigation. We were there under the sky, studded with so many stars, twinkling in their own brilliance. As whole day we traveled in the bus so we were all a bit tired. We took our diner and went to sleep so that we can get up earlier the next morning to begin our Sandhan Valley Trek.

Valley of Shadow – Trekker’s Valley:
We started our trek early in the morning at or around 8 Am with an intention at the back of our minds to reach Karoli Ghat Base camp by 5PM.  After 15mints of our trek we found ourselves in the mountainous valley, covered on two sides by hills, reaching to the height of 150fts. (Our trekking was taking us to the Karoli Ghat). Water was mildly gushing through the spaces between the rocks and we followed the water flow. After crossing some big rocks, we found a small water pound (Water was actually flowing through the rock-cave). Srikanth and Aamir Ali went into the cave to fill the water-bottles. Rest of the team members were bouldering. Ultimately, we got the water pool of some 3ft in height. Every one of us crossed the water pool with language stuck to their back but unfortunately, Yogi slept into the water (he enjoyed that slip).
Heading forward and forward:
Crossing this, we started bouldering the valley and reached the second water pool. The level of the water was 5fts and the rock was slippery. Mel, Vinay, Virender and Aamir Ali went into the water pool to get the luggage passed on, helped other people to come onto the other end of the water pool. Then again, we started bouldering the rock. It was completely at a descending level. Lipika, and Deepika were tired and faced some difficulty in carrying their bags and boulder. However, they managed pretty well, somehow.


After continuous bouldering (for more than 3 hours), we reached the first rock patch in the valley. The height of the rock patch was 50ft and there was no option but to rappel down. Mel took out his rappelling stuff, displaying no signs of any tiredness or anything. The other members just gave a startling glance.


Srikanth started rappelling with his bag but unfortunately, due to the weight of the bag Srikanth momentarily lost the balance and was hanging upside down but managed tactfully well and rappelled down. Aamir Ali tried to boulder down from the other side of the rock face but couldn’t able to manage. He even slept from the height of 20fts but luckily, as the rope was tied round him so he was safe with just some small bruises. We then decided to rappel rest of the team and Mel was belaying them.
Due to lack of time, we rappelled down faster, had lunch and then continued trekking and reached the second rock patch. The height was 7ft. Srikanth used the rope to get down but really faced some difficulties to move to the other rock patch which was about 15ft. (It really required a technique to get down with the help of the rope. A few members burnt their hands while getting down).


We then trekked for one hour, reached the base camp of Karoli Ghat by 7PM. Mel pitched a tarpoline tent in the night and had delicious noodles and the tea. The dinner was cooked by Anwesha and Yogi. We all were suffering from a bit of body pain, had got some minor injuries as well. Because of tiredness, we slept early to wake up early the next day as we had to trek back to Samrad village through Karoli Ghat.


We woke up in the morning at or around 5:30AM to trek back to the village to catch the bus. As the base camp was surrounded by the hills so we were unable to see the route due to darkness. We packed the bags and started trek at 7:30Am. Aamir Ali was leading the team, followed by the marked routes. The trek was completely ascending and the height of the hill was perhaps more than 4000 ft. Route was easier to be found out. As none of us were carrying water bottles so were all dehydrated and faced difficulty in moving the feet (Active members were pushing less active members to move forward).


Finally, after 3 hours of continuous trekking, we reached Samrad village by 10:45 AM. We had lunch at Yeshwant house and started our journey back to Pune. We boarded the train at 7Pm (Only the tickets of the six members were confirmed and the rest of the members were in waiting list). Pradeep called almost all the travel agents in Pune to book the bus but couldn’t just get through.  There was no time even. Our bus driver was very supportive, took us to the station by 6:30Pm. We got 5 seats in bus near the station and the rest of the non confirmed member s took the local compartment tickets and paid fine to the TC. Two on one seat till they reach Hyderabad.

Our three -day trekking on the Valley to Karoli ghad made us face alot of challenges and but there was excitement to the brim. -- Thanks to Great Hyderabad Adventure Club 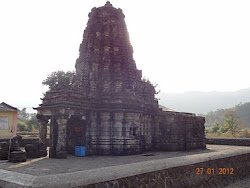 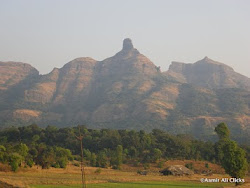 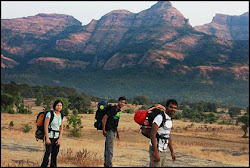 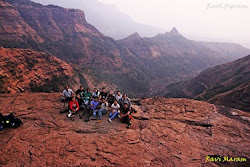 Starting point of the Valley 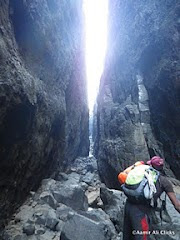 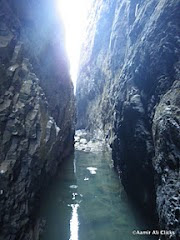 luggage passing from the Water Pool 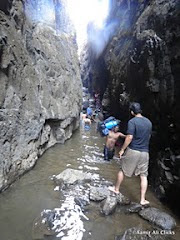 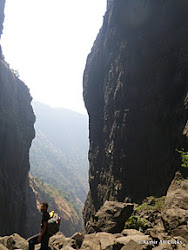 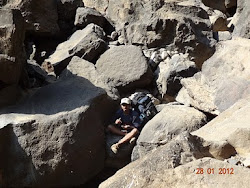 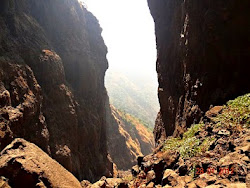 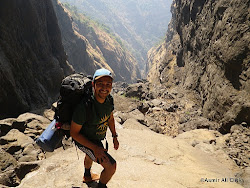 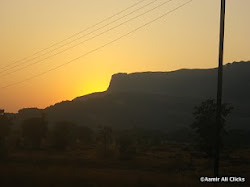